Kapiti Cakes & Bakery owner Thomas was among one of the judges who was here to find the best hot cross buns in New Zealand.

New Zealand’s best hot cross bun in 2017 is being made by Auckland baker Tong Min Li of Hillpark Bakery in Manurewa.

His hot cross buns topped 180 entries in the 2017 Baking Industry Association’s competition and he won over the judges with his cinnamon, mixed spice, allspice, raisins, currants and mixed peel, made with a butter and egg-enriched dough.

Chief judge Michael Gray said Li’s buns were nicely formed, had a good height and good distribution of fruit through them.

“They just had a really well-balanced flavour inside them that made the judges want to go back for a second taste.” 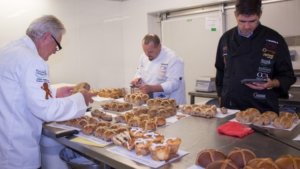 Third Place went to Deborah Bruce of Ubake in Timaru for her traditional bun containing mixed spices and orange-soaked sultanas. It was glazed with an apricot, orange and clove-infused sweet glaze and used a long fermentation period to develop the flavours.

He said hot cross buns are as popular as ever and new flavours were helping that. They were the biggest seller around Easter and they were also a chance for bakeries to show customers they didn’t just put the same product out day after day. Hot cross buns were a way to help keep people excited about baking, Gray said.